5 ways to avoid the spooky tricks from eating too many Halloween treats! Learn More >

E-cigarettes – Not as Healthy as They Seem 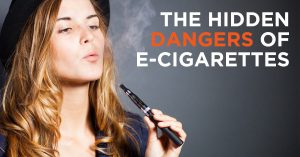 Electronic cigarettes continue to grow in popularity among younger adults and current and former smokers because they are often perceived as a healthier alternative to conventional cigarettes.

However, while e-cigarette vapors do contain far fewer harmful compounds than tobacco smoke, e-cigarette aerosol is not harmless.

As a dentist, here are five reasons I recommend you avoid using e-cigarettes.

It’s important to remember that nicotine is not only addictive, but is known to contribute to gum disease (as well as other health effects, including multiple types of cancer and heart disease).

A University of Rochester Medical Center study showed that when the vapors from an e-cigarette are burned, it causes cells to release inflammatory proteins, which in turn aggravate stress within cells, resulting in damage that could lead to various oral diseases. How much and how often someone smokes e-cigarettes will determine the extent of damage to the gums and oral cavity.

Some of the toxic chemicals use in e-liquids include; Diacetyl Nitrosamine (a known carcinogen), Diethy Glycol (used in antifreeze and known to be toxic to humans), Anabasine (an insecticide) and Myosmine (harms the DNA found in all cells).

Research has found that users who vaped multiple times per day exposed cells that were already damaged to toxic substances in vapor (with or without nicotine) leading to oral ulcerations, potential cell mutations and oral cancer.

Studies have shown that flavorings used in vaping liquid can lead to gingival inflammation and oral tissue damage. Rather than being benign, as many people assume, artificial flavors induce tissue damage and have a toxic effect on white blood cells, with the worst impact coming from cinnamon, vanilla, and buttery flavors.

If you have questions about your use of e-cigarettes, please talk to your hygienist or me during your next appointment.  We care about you.